1501 Lotus Lane
Lufkin TX 75904
1-936-634-4233
nuns@lufkintxnuns.org
Chapel open for prayer every day from 7:00 AM to 8:00 PM.
Here at the monastery, we are blessed with many different kinds of birds. In addition to migrating birds such as robins, juncos, and cedar waxwings, we also see numerous birds who seem to live in our area year-round. We have even seen the occasional heron land in our lake and hunt for fish! But mostly we see mockingbirds, cardinals, hawks, crows, house finches, and wrens and sparrows of various kinds. They are not only fun to watch but also a reminder of God\’s provident care for us–if He watches over these birds of the air, how much more will He watch over us and keep us safe? 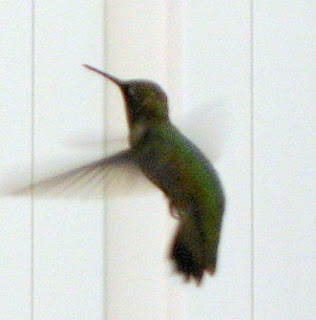 One of our sisters put up a hummingbird feeder and it has attracted large numbers of these small and beautiful birds. In fact, they tend to fight over feeding rights–if one goes to drink, the others come to chase him away. But recently they have become more civil, and we have spotted two or more drinking at the same time. Incidentally, it\’s harder than you might think to take a picture of a hummingbird! 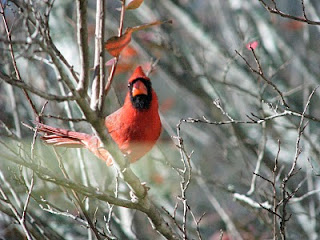 This determined cardinal has been pecking at various windows around the monastery for months! He most often flies at the windows in the refectory, but has been known to attack windows in the infirmary, dormitory, community room and even the chapel. We\’re not entirely sure why he does this–does he see his reflection and mistake it for another cardinal? Or does he just want to come inside? We may never know for sure, but he is certainly persistent.
One of the Fathers of the Church commented that all creatures pray, saying that even the birds of the air open their wings in the form of a cross. May God be praised for all His wondrous creation, which glorifies Him in so many ways!