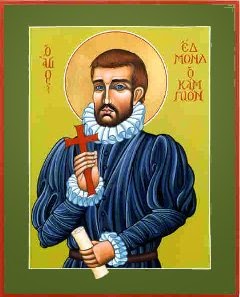 \”Be it known to you that we have made a league–all the Jesuits in the world…–cheerfully to carry the cross you shall lay upon us, and never to despair your recovery, while we have a man left to enjoy your Tyburn, or to be racked with your torments, or consumed with your prisons. The expense is reckoned, the enterprise is begun; it is of God, it cannot be withstood. So the Faith was planted: so must it be restored.\” –St. Edmund Campion, \”Campion\’s Brag\”
St. Edmund Campion (c.1540-1581) was a Jesuit priest and martyr for the faith in Elizabethan England, when it was a crime to be a Catholic. He left a promising career in England to become a Catholic priest and a Jesuit, returning to England secretly in 1579. While ministering to imprisoned Catholics in London, he wrote a challenge to the Protestant authorities called \”Campion\’s Brag\”. This, and the publication of his treatise \”Ten Reasons\”, caused great sensation in England and efforts to capture Campion were stepped up. He was finally captured in Norfolk in 1581, and after repeated tortures was executed at Tyburn on December 1.
We remember St. Edmund Campion during Advent, not only because his feast day often falls within this season but also because he is a man who defended the faith not with gloom and doom (as we might expect in such a time and situation) but with style and grace. He forgave his enemies and prayed publicly for Queen Elizabeth I right before his death. He shone a light which illuminated countless others: one young man who attended his execution was so moved that he became a Jesuit and a martyr himself. May we too be encouraged by St. Edmund\’s example to defend the faith, to promote it, and to do it with the cheerfulness and joy that is the infallible sign of the Holy Spirit.