1501 Lotus Lane
Lufkin TX 75904
1-936-634-4233
nuns@lufkintxnuns.org
Chapel open for prayer every day from 7:00 AM to 8:00 PM.
The Internet can be an excellent tool for cloistered nuns! Contacts can be made without ever having to leave our enclosure. Some Nuns in the other monasteries even take classes online. Two of our North American monasteries, have been having several classes via \”Go-To-Meeting\”, a program similar to Skype of which most people have heard.

The Association Council suggested the possibility of expanding its reach to include all the monasteries, if they wish, for our On-Going Formation Program. So, this weekend we are in the midst of a trial run to see how we can communicate through cyberspace.

Four Monasteries took the challenge: Summit, NJ, which is the \”hub\” of digital Dominican monastic activity; Squamish, BC, near Vancouver, Canada, who have been doing classes with Summit; Trinidad; and ourselves in Texas. 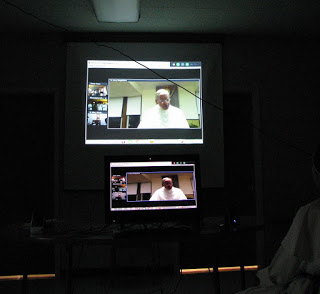 We are attending four lectures given by Father Augustine Thompson, OP, of the Holy Name (California) Province. He is speaking on the History of the Dominican Lay Brothers. It is fascinating and he is an excellent teacher. I think those of us who are attending the lectures would agree that it has been an enriching experience in many ways!