Today we begin our journey into the holiest week of the entire year. As with all the Sundays of Lent, we are still traveling with St. Thomas Aquinas. This day he comments on the cry of the Jews, which the Church has incorporated into the Holy, Holy, Holy, of the Mass. 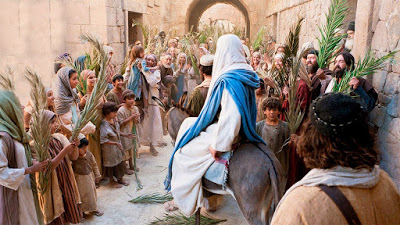 The Evangelist says [the crowd in Jerusalem that first Palm Sunday morning went out to see Jesus and then] he mentions how they conducted themselves.

First of all, they took branches of palm trees.
Now the palm, since it retains its freshness, signifies victory. In antiquity it was conferred upon conquerors as a symbol of their victory. We read in Revelation (7:9) of the conquering martyrs that they held \”palm branches in their hands.\” So the branches of palm trees were given as praise, signifying victory, because our Lord was to conquer death by dying and to triumph over Satan, the prince of death, by the victory of the cross. …
Then, the Evangelist mentions what they said:
they shouted out Hosanna! Blessed is he who comes in the name of the Lord, the King of Israel!
Here they combine both petition and praise. There is petition when they say, Hosanna, which means, \”Save us, I implore you.\” It is like saying: hosy, which means \”save,\” and anna, which means \”implore.\” According to Augustine, this is not a word, but rather an exclamation of one praying. And it is quite proper that they should ask the Lord Jesus for salvation, because we read in Isaiah (35:4): \”Behold your God…He will come and save you\”; \”Stir up thy might, and come to save us!\” (Ps 80:2).
They praise him for 2 things: for his coming and for the power of his reign or kingdom.
They praise his coming when they say,
Blessed is he who comes in the name of the Lord.
To bless is to speak good things. Now God blesses us in one way, and we bless God in another way. For when God blesses us he makes us good, since for God to speak is to do: \”For he commanded [that is, spoke], and they were created\” (Ps 148:5). But when we bless God, we profess his goodness: \”We bless you from the house of the Lord\” (Ps 118:26); \”Blessed be everyone who blesses you!\” (Gen 27:29). Therefore, Blessed is he who comes in the name of the Lord, for Christ worked in the name of God, because everything he did he directed to the glory of God.
Now because both the Father and the Son are the Lord,
the phrase, in the name of the Lord,
can be understood in two ways.
In one way, Blessed is he who comes in the name of the Lord, means blessed is he who comes in his own name, as Lord: \”The Lord is our ruler\” (Is 33:22). Moses did not come in the name of the Lord in this way, because he came as a servant: \”Now Moses was faithful in all God\’s house as a servant, to testify to the things that were to be spoken later\” (Heb 3:5). According to Augustine, the better interpretation would be to say that in the name of the Lordmeans in the name of the Father. For Christ\’s words direct our minds to this: \”I have come in my Father\’s name\” (5:45). Further, there are two ways in which Christ is said to have come in the name of the Father. First, he came as the Son, which implies the Father; secondly, he came to manifest the Father: \”I have manifested thy name to the men whom thou gave me\” (17:6).
The people praise the power of his reign when they say, the King of Israel!Literally, the Jews believed that he had come to reign over them temporally, and ransom them from subjection to the Romans. That is why they hailed him as a king: \”He shall reign as king and deal wisely\” (Jer 23:5); \”Behold, a king will reign in righteousness, and princes will rule in justice\” (Is 32:1).