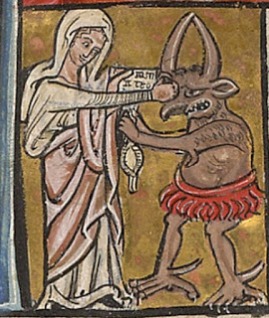 This is the conclusion of Sister\’s homily. We wish you a blessed Solemnity of the Annunciation!
Because Mary was conceived without original sin, sometimes people suggest that she knew everything that what was going to happen for the rest of her life after Gabriel came to her—particularly, of course, the death and resurrection of Jesus. I don’t believe this was the case. If you know everything that will happen in advance, your obedience is more like submission to some greater power than an act of free will. Obedience is not bracing yourself for the next terrible thing you know about in advance, or rejoicing because you know something good is coming. It is like a wedding vow: “for better, for worse; for richer, for poorer; in sickness and in health…” Or like a religious vow. You make your vow of obedience until death, and then you trust God to lead you in all His ways. There are only so many questions you can ask before you realize that you either have faith in God, or you don’t. Mary understood this. She asked Gabriel the one essential question, and having received the answer, she stepped freely into the darkness of faith, confident that God would gradually brighten her path as the years passed.
On this day  when Mary proclaimed her obedience to God by accepting His will trustingly, a battle commenced which is still going on today in the hearts and minds and souls of all men and women here on earth. Sometimes—perhaps more often than not—it looks like the power of sin and evil are standing their ground, or even making inroads into this disputed territory. But we must always remember that here in our present lives, we can’t see things as clearly as God does.  We don’t understand why things turn out the way they do. For us, there is often a different temptation: a temptation to despair, to give up. When we have despairing thoughts, we should remember that Satan—or one of his minions—is whispering these words into our ears. The best advice: don’t listen. Ignore him. The longer you tolerate him, the worse it gets. Instead of wasting your time dialoging with Satan, do something positive. It doesn’t have to be big. Fr. Jacob Boddicker, SJ recently wrote an article on how to “fight the battles you can actually win”. He says: “Consider the fact that an avalanche can destroy an entire town and is made of snowflakes, or that a tsunami can devastate vast regions and is made of drops of water.” All these little acts of patience, kindness, humility; all the ways you are helpful; all the little good deeds no one ever notices: these are the snowflakes, the drops of water that Mary points out to us with a simple word of Yes to God. These are the quick, dance-like steps some boxers use to throw their opponents off guard so they can knock them out cold.
Doing concrete good deeds, big or small, will save souls. Sitting around fretting about the state of the Church in general won’t. That’s why I especially love the image of Mary from an illuminated manuscript. It’s an interesting contrast with similar illuminations of Eve. In these, Eve is often looking at the fruit pensively, listening to the serpent, thinking. In this picture of Mary, Satan is standing in front of her, apparently trying to hand her something. Mary is smiling very sweetly and smashing her fist into his face. As the acclaimed boxer Muhammed Ali said, “Float like a butterfly, sting like a bee.”