Our May Crowning was on May 8 this year–Mother’s Day.

Some of you may be aware that during May, our Monastery has a May Novena. And it’s not too late to send in your intentions! Please feel free to email them to us, and we will include them in our novena prayers throughout this month.

May Our Lady bless you in a very special way this month!

Bishop Joseph Strickland of Tyler, TX has declared that 2022 will be a year dedicated to Mary and the Eucharist for all of us here in the diocese. This has special meaning to us because Eucharistic devotion is an important part of our spirituality here. The Blessed Sacrament is exposed in our chapel from 8 AM to 8 PM every day, and each sister takes a turn praying with Our Lord truly present under this sacramental sign. We also welcome anyone who wishes to come and pray with us during these times.

It almost goes without saying that Mary is another big part of our lives! Each of us takes the name “Mary” as part of our religious name–usually just Mary but sometimes it’s Maria, Marie, Miriam, etc.–and cherishes a special devotion to the Mother of God, especially as Queen of the Most Holy Rosary. We pray the rosary together every afternoon at about 2:40 pm (on Sundays we say it privately) and you are welcome to join us for that, too.

Dominicans through the centuries have been devoted to Mary and the Eucharist. Legend has it that Our Lady herself gave St. Dominic the rosary as a powerful prayer to help in his work re-establishing the Catholic faith in Europe. St. Catherine of Siena, it is said, lived on nothing but the Eucharist for the last few months of her life. Our own monastery traces its Eucharistic roots back to France, where a monastery of Dominican nuns established perpetual adoration and then brought this tradition to the United States when a foundation was made here.

We feel blessed to be a part of a year that will lift hearts and minds to Mary and the Eucharist–in the diocese of Tyler, Texas and hopefully in many other places as well. If you are in the Lufkin area, please come by and spend some time with Jesus–He’s waiting for you!

The following is Sr. Mary Jeremiah\’s beautiful talk for our Solemn Chapter (or, as we like to refer to it, our Big Chapter) on March 24. We hope you enjoy it as much as we did!

The title \”Mother of Mercy\” is familiar to most of us from the well-known Salve Regina, in which Mary is addressed as our Queen and Mother of Mercy.

Note that this is the chant used by Dominicans, and is completely different from the Gregorian version often found in parish hymnals, etc.
Why do we call Mary our \”mother of mercy\”? It is a fitting title, because she was completely human, and yet born without Original Sin, thanks to the foreseen merits of her son Jesus. Mary could see all the flaws and faults of the rest of humanity, and look upon these with mercy and compassion, not because she had personal knowledge of these things, but because her sinless nature gave her the privilege Adam and Eve lost when they ate the forbidden fruit in the Garden of Eden: she always knew the right way to act, and she did so. Her will was perfectly aligned with the will of God.  Just as God has mercy on all His children, always drawing them to repentance when they sin, Mary too is merciful. She is not God\’s equal, but she is the most powerful intercessor with God that we have. Thus, in this time when many would rather pursue what they believe to be justice rather than show mercy toward their fellow flawed human beings, Pope Francis made a wise decision in adding this petition to the Litany of Loreto.
Mary, Mother of Mercy, pray for us! 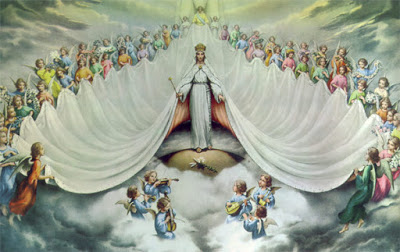 We hope you have enjoyed this series of posts on Mary! It was a challenge at times to write about Mary\’s titles from the Litany of Loreto, since we chose the more poetic ones. But we leaned a lot by meditating on them, and we hope you did, too.
Normally, we would have a blog post about our May crowning to finish things off, but we always do this on May 31 (feast of the Visitation), and this year the feast of the Visitation will not be celebrated because May 31 will be Pentecost Sunday. (We\’re still planning to have the May crowning, but it\’s going to be kind of simple.)
There are more things coming up so do keep watching this blog!

St. John Bosco (or Don Bosco) had a great devotion to Mary under the title \”Help of Christians\”. In fact, he had a famous dream about how devotion to Mary and Jesus in the Blessed Sacrament would one day completely prevail over the power of the enemy.

In the dream, Don Bosco sees two great columns standing side by side in the ocean, with chains and anchors waiting. One column is Jesus in the Blessed Sacrament; the other is Mary Help of Christians. As he watches, he sees a ship representing the Church trying to get to these two columns and there become safely anchored. But they are in grave danger of being defeated by an enormous number of enemy ships, equipped with all kinds of weapons. The Pope is the captain of the ship, and he strains to bring the ship between the columns, encouraging his brothers (priests, bishops, cardinals) not to give up. However, the Pope is seriously wounded. He gets up, but is killed by a second blow. The enemy has a moment of triumph, but they see to their dismay that the Church has elected a new Pope even before news of the former Pope\’s death was known. This new Pope is able to guide the ship safely between the columns and anchor it securely. A number of other, smaller boats join the ship, while the enemies are thrown into confusion, firing on each other, and eventually sinking. Don Bosco interpreted this dream as the attack of secularism on the Church. Although he had this dream in 1862, we can still see that the Church is under attack by the enemies of God.

The Blessed Mother is celebrated under her title \”Mary, Help of Christians\” on May 24.

Mary, you are our Mother, who is always ready to help us when we are threatened in any way by the powers of evil. It may be something as terrifying as Don Bosco\’s dream, or it may be a seemingly simple desire to tell a \”little white lie\” or shoplift a candy bar. Help us in all things, so that we may one day guide the ships of our own souls in between the saving columns of Jesus in the Blessed Sacrament and Mary, Help of Christians. 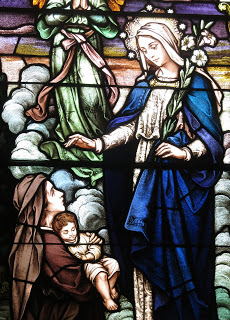 Mary is the best of all mothers. Our human mothers, no matter how exceptional, only give us a reflection of the love and concern that Mary has for us. No wonder so many saints and holy people, deprived of their mothers by death or other misfortune, ask Mary to be their own true mother.
Pondering Mary as Comforter of the Afflicted, it seems this role shows us Mary as the intercessor par excellence. When we are drowning in sin, we call to Mary, who helps us to come safely to the shore where we can ask for God\’s forgiveness anew. Mary comes before God just as Queen Bathsheba entered the presence of King David, reminding him of his promise that their son Solomon would reign as king after him. She is like Esther, approaching God with a mixture of confidence and holy fear. We ask her help, because we know that God will not refuse His mother anything she asks of Him.
Just as children do not always understand what their parents know is best for them, we sometimes become frustrated or angry with Mary. We have an idea of how our prayers should be answered, and if things don\’t go our way…..!! So we must always have trust in Mary, and through Mary, we have trust in her Son, who will make all things right in ways we cannot begin to imagine.
Mary, Comforter of the Afflicted, intercede for us all during this time of pandemic. Help us to discern what God wants of us, and let us not ignore His guidance.
Dominican Life on Lotus Lane
Blog at WordPress.com.
Loading Comments...