March 2 is the day Texas declared its independence from Mexico and so we are celebrating today! This is a special year for Texans because 2011 marks the terquasquicentennial of independence from Mexico–that\’s the 175th anniversary! What many people probably don\’t realize is that Texas was for centuries a Catholic area–\”discovered\” by the Spanish around 1519 and later a part of Mexico before winning independence in 1836. In their quest for gold and glory in the New World, the Spanish also brought priests to help spread the Gospel. Many of these missionaries in Texas were Franciscans who ministered to the Native Americans and built missions which are still standing today. Remember the Alamo? That was originally a Catholic mission in San Antonio!

The Spanish had help from a visionary Spanish nun, Maria de Agreda, who apparently bilocated to Texas in the 17th century and, while present, instructed the Jumanos (Native Americans in western Texas and eastern New Mexico) in the Catholic faith. Many of these Jumanos greeted the Spanish when they arrived and asked to baptized as a result of her work. 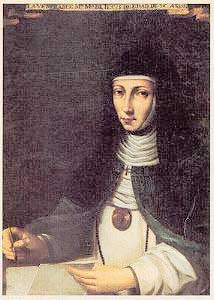 Maria de Agreda, who was a Poor Clare (Franciscan) nun
One of the most famous Native American converts in Texas is Angelina, a Caddo woman who learned Spanish and was invaluable for her intercultural skills, both as an interpreter and an adviser. The only county (out of 254!) in Texas to be named after a woman is Angelina County–coincidentally the county where our monastery is located!

The statue of Angelina with a Native American and a Franciscan friar in Lufkin
(Sculpture by Steve Gustafson)
There were many Catholics who fought for Texas independence. Some of the most famous were Jim Bowie, Ben Milam, and Erastus \”Deaf\” Smith. But the Catholic presence in Texas might have been lost if not for the work of dedicated bishops (like Bishop Jean Marie Odin, first bishop of Galveston) and the many diocesan and religious priests, religious brothers, and sisters who worked so hard to establish churches, schools, hospitals and orphanages in those early days–and the many faithful lay people who came as settlers, particularly Gil Y\’barbo (one of our sisters is a descendant of his!).  They not only kept the Catholic faith alive in Texas, but also paved the way for contemplative life in Texas, and we are glad to say there are several contemplative monasteries in Texas (including ours, founded in Lufkin in 1945).  The Catholic presence continues in Texas today and we are grateful for the contributions Catholics have made to our state throughout our history!

A view of the front of our monastery–notice the bluebonnets, our state flower!