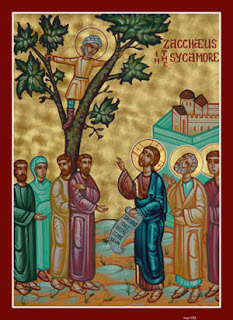 I see that we will be hearing your story again this Sunday, how you wanted to see Jesus and so climbed a tree when he passed by and how he told everyone there that salvation was coming to your house that day. Did you know that the salvation he was talking about was he himself and that the house he meant was not your dwelling place but you yourself? What a day that was–himself coming to yourself!
I wonder if you remember all the others who had the same desire as you did that day?–to see Jesus, and not just with their bodily eyes, but with their hearts and understanding?
Remember the Magi and the shepherds who also desired to see Jesus, though they did not know his name then? But seeing him brought them joy and they went on their way glorifying and praising God for what they had seen.
John the Baptist saw him too at his baptism and saw the Spirit come upon him in the form of a dove. Later Jesus would confirm John\’s witness when he told John\’s disciples to tell him all they had seen and heard Jesus do as proof of Jesus\’ mission.
And then John encouraged some of his own disciples to follow Jesus, and when they asked him where he was staying, he told them, \”Come, and you will see.\” (John 1:39)
Later in Jesus\’ ministry, some Greeks came to Philip asking to see Jesus. Philip himself would one day ask Jesus to show him the Father and Jesus would tell him that seeing Jesus was to see the Father, that he and the Father were one. What a powerful revelation that was for Philip to absorb!
You know Mary Magdalene saw Jesus after his resurrection but did not recognize him at first. But when she did, he told her to \”Go tell my brothers to go to Galilee, and there they will see me.\”
Of course, we can\’t forget St. Stephen who, as he was being stoned to death, looked up to heaven and saw Jesus standing at the right hand of God.
There are other occasions which I could mention, but these are enough to see what great company you have kept!
As for us, we pray that when we hear your story again Sunday, our own desire to really see Jesus will be greatly increased, so that salvation might come to our house, for when we see him as he is we shall then be like him.
Signed: A fellow seeker